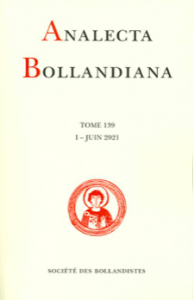 Among the many current periodicals in the world, very few can claim such an authority, that even the oldest issues keep all their usefulness one century after their publication. That is however the case for Analecta Bollandiana, a journal of critical hagiography, edited and published since 1882 by the Société des Bollandistes in Brussels. Since the very beginning, the journal was conceived as a continuous updating of the prestigious Acta Sanctorum series, as well as an entirely new instrument devoted to hagiographical research. Every issue contains both critical editions of hagiographical texts (Greek, Latin, Oriental…), and fundamental studies about hagiography. The articles are published in modern international languages (English, French, German or Italian), although an English summary has been appended in the latest issues to all the contributions which are not written in English. About one fifth of each issue is devoted to book reviews and bibliography on hagiography. Such contents make the Analecta Bollandiana indispensable in any department of medieval, Byzantine, Slavonic or Christian oriental studies, as well as of Church history, comparative religions, ethnology and folklore. With both the inheritance of the great tradition given by the Acta Sanctorum and the actual support of a highly qualified international scientific committee, Analecta Bollandiana has been for a century and will remain the ideal forum for everyone interested in Christian hagiography.