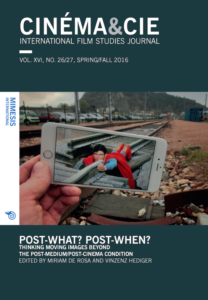 Our proposal stems from the idea of creating an instrument for the circulation and comparison of research as well as methodologies and wok programs on an international basis. The science community is more and more acquiring an international dimension, but apart from that the occasions for meeting and for joint planning are still rather scant. In Universities, archives and other centres the work of younger scholars is generally suffering from serious isolation: this journal is aiming at offering its contribution in solving also these problems.
Cinéma&Cie is promoted by the Udine International Film Studies Conference and the International PhD Program in Audiovisual Studies. It is naturally open to any external contribution. We do not envisage any rigid schemes, program lines in the way of Citizen Kane or “Dogma 95″, but believe however, that there is a reference and guidance framework as background for the journal’s work and orientation thus marking its peculiarity and its place in cinema studies. The following are some of the points we have focused on:

The journal will be published twice a year and will be only partially monographic. Furthermore it will publish studies carried out or recommended by its partners (New Studies). It will be an instrument for the diffusion of joint scholars, above all for their PhD dissertation (Projects & Abstracts). English and French will be the journal’s main languages.

The title was stolen from Louis Delluc. Perhaps something more…